Never mind what I might have done if not explicitly directed. I had been directed to use topic modeling on a project professionally, so I already had direct experience with relevant techniques on a challenging real-world problem. However, I encountered several unexpected difficulties sharing topic modeling results with a non-technical audience.

This motivated me to put something together to show, don't tell so to speak. I wanted something tangible for the folks I was dealing with to play around with. This was also a good excuse to use Streamlit and try out Streamlit Sharing. I had been proselytizing Specifically, use-cases where additional data scientists would be a bigger asset to the effort than adding a team of frontend software developers. Streamlit for a few use-cases professionally when really I had only played around with a few toy examples. Deploying via Streamlit Sharing was new and piqued my curiosity.

First, Il meglio è l'inimico del bene. the application is still very much a work in progress / prototype. There is functionality stubbed out that is not implemented (e.g., using non-negative matrix factorization1). Code all needs to be refactored out of a sprawling 250 line script too. Focus was on getting enough of the piece parts working well enough to allude to robust capabilities that could be implemented and having enough of a complete application to stimulate discussion. Second, Streamlit had good support for literate programming2. As a result, some narrative is repeated from the application here. As such, if you have already gone to the application you can skim some of what follows.

As I would find out, topic modeling can mean different things to different people. The words topic and model are common enough where most people can look at them and formulate an opinion on what the technique must accomplish when successful.

Without additional qualifications, the term topic modeling usually refers to types of statistical models used in the discovery of abstract topics that The word document here really ends up meaning any ordered collection of strings. occur in a collection of documents6. These techniques are almost always fully unsupervised although semi-supervised and supervised variants For example, Guided LDA or Seeded LDA in the semi-supervised case and Labeled LDA in the supervised case. do exist. Among the most commonly used techniques, and the one that is fully implemented in the application, is Latent Dirichlet Allocation (LDA)7.

For the representation, there is even this whole graphical language to describe the latent structure of the model inscurtible as it is 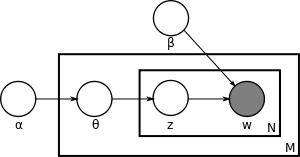 At a superficial level, LDA is just a matrix factorization of the words document relationship matrix (viz., below) into a two relationship matrices: words to topics and topics to documents. The theory posits an underlying distribution of words in topics and topics in documents but that is more of interest if one wishes to understand underlying theory which is well exposed elsewhere. 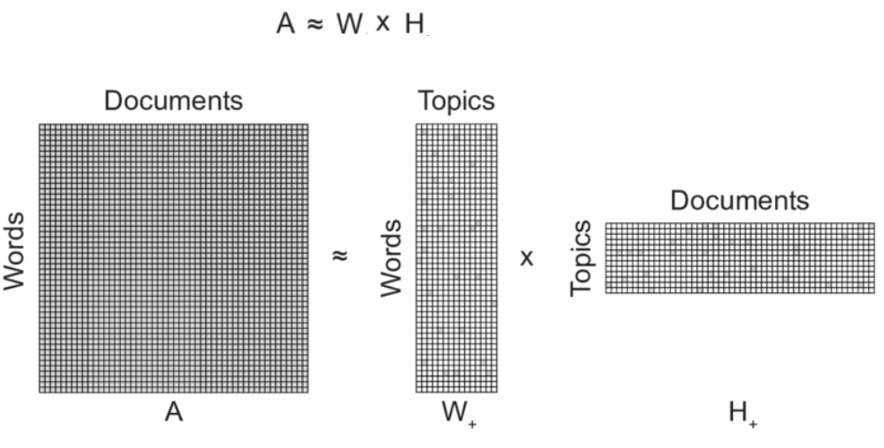 Not going deep into LDA theory here: that is a topic for its own blog post and another time.

I had done a lot of experimentation on the professional project. That experimentation In my professional use-case, data cleaning and preprocessing were probably the most important aspects. is not directly useful outside its context which I cannot share. I will highlight some snippets of code that may be of use to an aspiring topic modeler.

The Pareto principal of data science claims that 80% of time gets expended on data preparation and, as the story goes, the other 20% complaining about it. Preprocessing is vitally important in all machine learning problems. In NLP problems, there tends to be a lot more choices than in other domains. For topic modeling specifically, one usually wants to remove various types of named entities before applying modeling. The following function was used to denoise the text documents

In words, grab text out of a data frame column, remove some uninformative entity types, and run the documents through gensim.utils.simple_preprocess removing stopwords from nltk.corpus.stopwords.

I also experimented with using bigram and trigram phrases through gensim.models.Phrases Left in as application options. and gensim.models.phrases.Phraser but did not see a big lift. Using the bigrams and trigrams themselves rather than as a preprocessing step may have been more impactful. The final step in document preprocessing was using spaCy to perform lemmantization.

I Non-negative Matrix Factorization (NMF)1. had intended to add more modeling options but ran out of time. At very least, I will be adding in an option to use NMF in the future. Anecdotally, NMF can produce better topics depending on the dataset being investigated. Adding any method that is not unsupervised will be a much bigger lift. 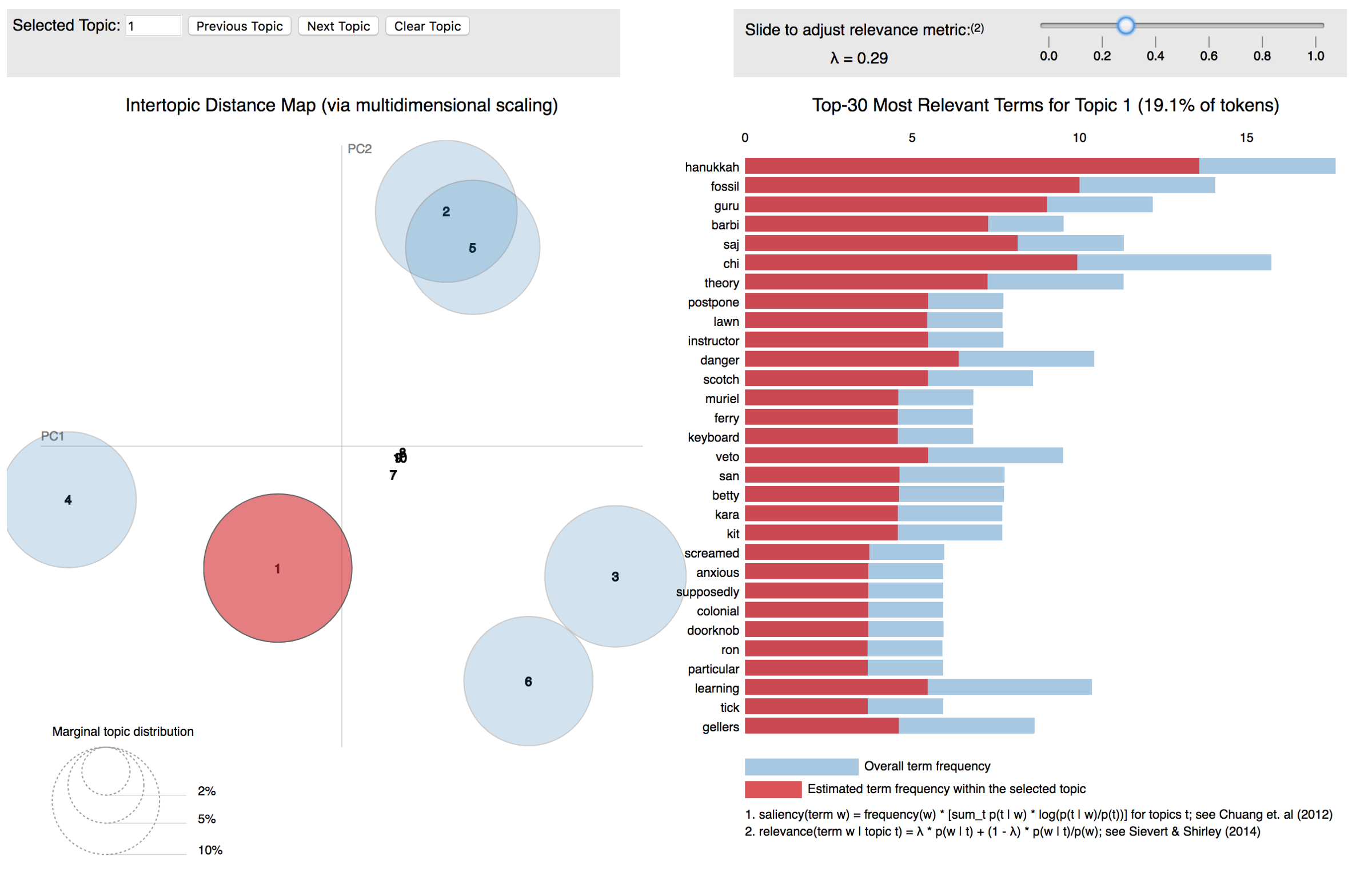 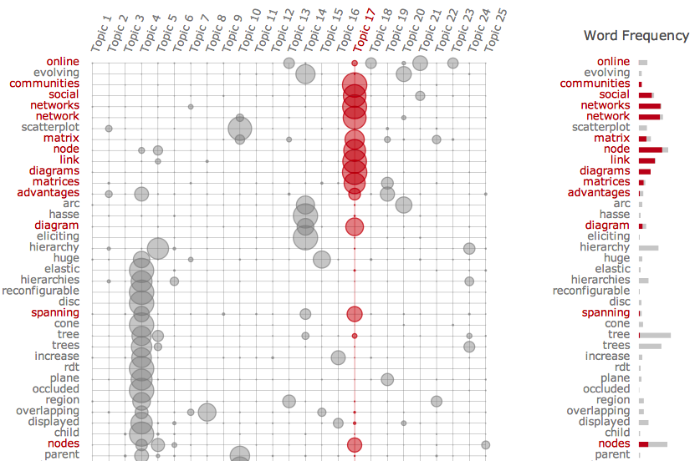 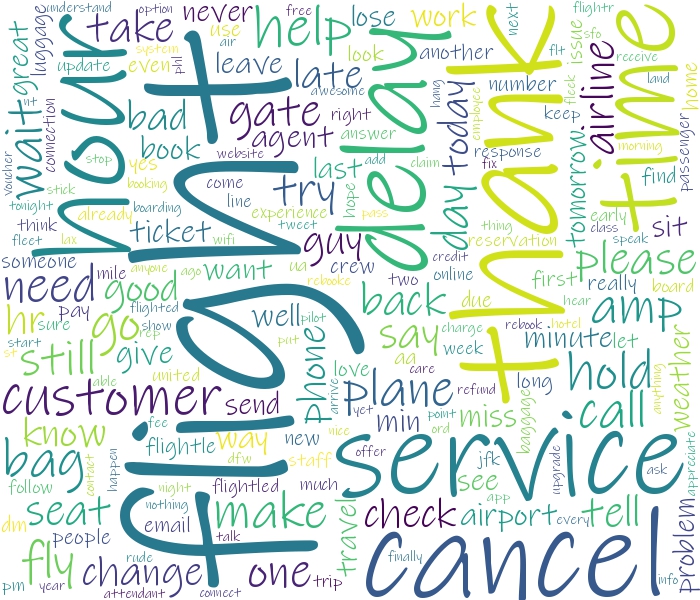 settings required a little playing around with to get something that looked decent. Adding additional visualizations is the main place I felt like I ran out of time and will likely revisit.

Plagiarized directly from their documentation. Streamlit is an open-source Python library that makes it easy to create and share beautiful, custom web apps for machine learning and data science. I will focus on the create here and on the sharing For example, between coworkers on a corporate network if the firewall rules are not too draconian. in the sequel although sharing on a trusted local area network is trivial.

The main value proposition is taking a data science or machine learning artifact to web application quick for the purpose of sharing with folks that would not be comfortable with something like a Jupyter notebook. On this it delivers. I went from script to web application in a couple hours. That allowed me to share a web application with a group of decision makers that were trying to make heads or tails of what topic modeling even meant. I was very impressed from the provider-end and received feedback of the same from the receiver-end.

Another benefit would be its pure Python nature (i.e., no HTML, CSS, JS, etc.) so no need to require data scientists to learn wonky web technologies they have no interest in learning. A comparison with Plotly Dash probably deserves its own blog post but the Dash approach is very much more in the camp of making React easier to do in Python. It is very much focused on

Probably not a big concern from most folks thinking about using this technology given its target but its worth noting, for those with experience in traditional GUI application frameworks, that Streamlit works more like an immediate mode user interface11. That is, it reruns the script from top to bottom each time a UI action (e.g., button is clicked) is performed. Aggressive caching, via the @cache decorator, allows for efficient execution: only rerun the code you need to on each change. This requires the user to make those decisions, and the arguments to be hashable.

It even supports screencast recording natively! Helps with showing folks how to use what you are sharing. 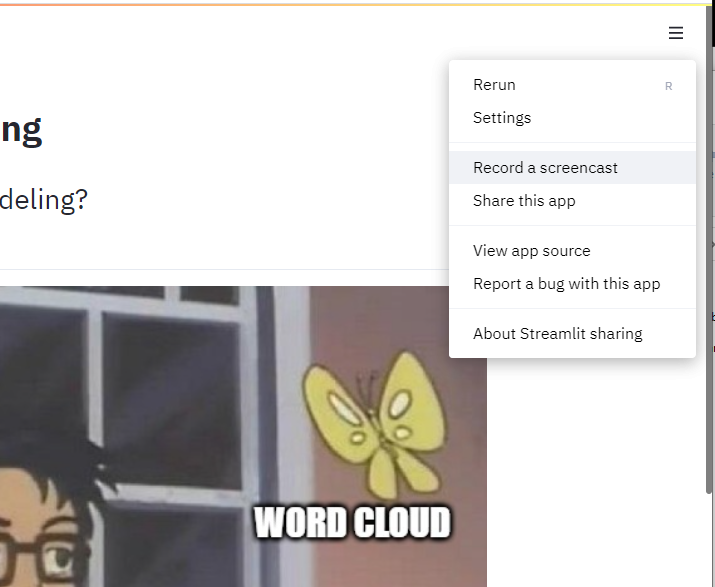 This video shows the use of st.sidebar context manager: a staple for application documentation, settings, and even navigation. Streamlit does not really have proper multipage application support yet.

This next video shows how usage of the new st.beta.expander context manager: it is fantastic especially for adding literate exposition sections that the user will want to collapse after they have read it to regain the screen real estate.

The last thing I'll highlight in the application is the usage of the new st.beta.columns context manager that was used to create a grid of word clouds for the individual topics. 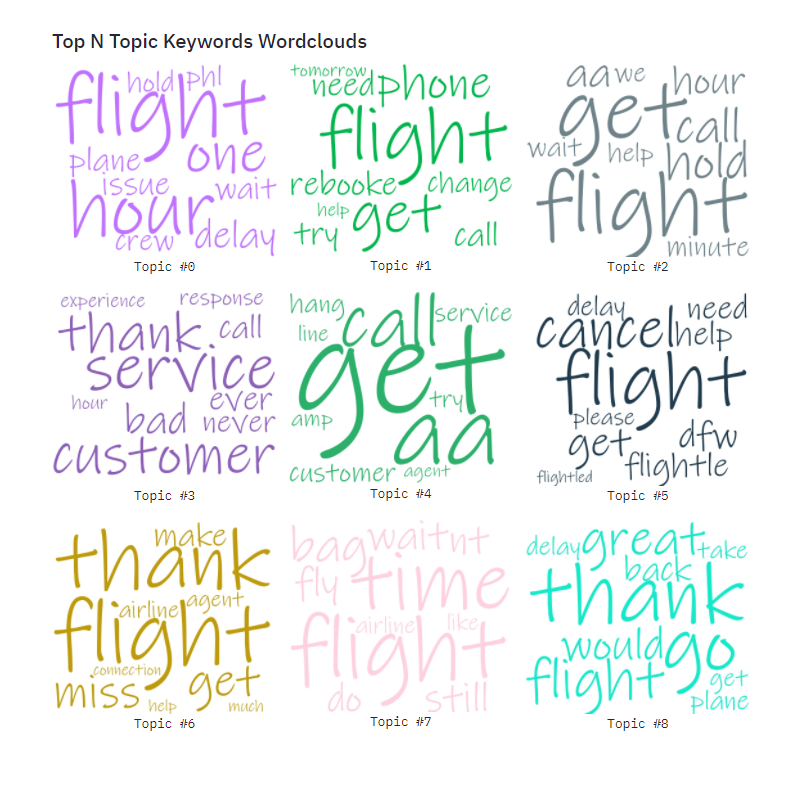 Here is the code

There is a ton more to dive into here but nothing that cannot be gained from jumping in and trying something yourself.

From their website: a gif is worth a lot of words

The Streamlit Sharing tagline is pretty good: deploy, manage, and share your apps with the world, directly from Streamlit — all for free.

The ease of sharing a machine learning application prototype was delightful. I had originally deployed on an Amazon AWS EC2 instance to meet a deadline (viz., below). Given my background and experience with AWS I would not say it was overly difficult to deploy this way, but I know talented machine learning professionals that might have had trouble here. Moreover, most would not want to spend their time on role access, security settings, setting up DNS records, etc. And yes, their time is most definitely better spent on what they do best.

In order to use this service you need to request and be granted an account. You do that here. You will get a transactional email letting you now that you are in the queue for access, but the invite is not coming just yet. I requested access on Feburary 11th and received access on March 2nd or about 20 days. I would suggest, if you think you will want to try this out anytime soon, that you sign up right away.

Once access is granted it is pretty easy to just follow the gif above or the directions here. There are a couple of things that required me iterate on my github repository to get everything working including

Otherwise it was completely straight-forward and accomplished in just a couple clicks. Official guidance on deployment of Streamlit applications can be found here.

Nonetheless, very generous of the Streamlit team! Running on AWS was only 43¢ a day (about $157 a year or $13 a month) but free is certainly an improvement.

It is also important to note that this is absolutely not a replacement for production deployment. Each user is limited to 3 applications. Individual applications are limited to being run in a shared environment that can get up to 1 CPU, 800 MB of RAM, and 800 MB of dedicated storage.3 So not the right place for your next start-up's web application, but a great value proposition for sharing quick prototypes.

If you have gotten this far I would like to thank you for taking the time. If on reading this you were interested enough to play around with the application and have feedback I would love to hear it.

The prototype application can be accessed on Streamlit Sharing4 and the code is available on Github5. Intention is to augment and improve what is there time permitting. Plan to get my thought for improvements and expansion into Github issues as I have time to work on them.